Keep your Vaccines Safe along the Cold Chain   Shop Now > 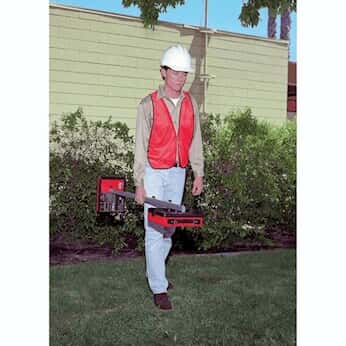 More About this Item

The well known M-Scope Model TW-5 Pipe and Cable Locator has been upgraded in performance and user friendliness to the Model TW-6. The new model performs the traditional finding tasks of locating underground metal objects such as pipes, cables, manhole covers, vaults and valve boxes.

Like earlier models, the TW-6 will be primarily used by water departments, telephone companies, electric power companies, gas companies and petroleum pipeline companies to know where to dig, and sometimes more importantly where NOT to dig in making repairs or rearranging buried lines.

The substantial increase in sensitivity of the TW-6 required that we remove all unnecessary metal parts. They collectively inhibited the tracing distance of the more efficient locator. That is why the new very durable catches holding transmitter and receiver together as well as the individual carrying handles are now completely non-metallic. The familiar aluminum loop antennas on the TW-5 and earlier models have been replaced by actual coil windings around the edge of the underside of the face panels on the transmitter and receiver. This change along with the completely upgraded electronics has boosted the tracing performance 50-100%. Longer tracing which used to require expensive high powered fault locator/tracers can now be accomplished very economically.

Conductive Tracing
The is the preferred method for tracing because the transmitter makes a direct physical hook-up with the line to be traced. The included ground plate assembly plugs into the transmitter with one wire going to an alligator clamp to be attached to the pipe, non-energized wire, or conduit. This concentrates the signal on the known line to be traced and there is less chance of the signal being induced to a nearby or adjacent line to cause confusion. Tracing distances are increased 25-50% over the inductive method. Non-Metallic pipes may be traced conductively as the ground plate assembly is attached to a plumber’s “snake” or electrician’s “fish tape” running inside of the pipe.

Inductive Locating (when no starting point)
Using a four foot handle, you have the transmitter behind you and the receiver ahead, while walking a pattern to discover buried metal objects. The locations become known from meter movement and speaker sound. The ground or pavement is marked for each sensing so that a pattern emerges of underground linear objects such as pipes and cables, or separate items such as a buried manhole cover.

Inductive Tracing
When one point is known on a linear conductor such as a pipe or cable, the transmitter portion of the TW-6 can be placed over it and tracing can go in either direction from the point. You then walk out the path of the line and “wag” the receiver left and right over the line. At a distance from the transmitter, the signal will become faint but the transmitter can be brought up to that point so tracing can continue to the end of the line.

Need Help with this product?