“Why do I have to calibrate my balance? Wasn’t it done at the factory?”

Published with permission from Adam Equipment®

This question frequently comes up when a customer receives a balance and is instructed by the operator's manual to calibrate it before use. There are many reasons a balance may need to be calibrated:

The least understood of these reasons is due to the imperfect shape of our planet. Gravity is not the same everywhere on Earth. This is important because balances do not measure mass, instead, they measure the force of gravity pulling the mass towards the center of the Earth.

During calibration a previously determined weight is used to set the balance's parameters and thus guaranteeing its accuracy. For example, when a 1 kilogram mass (the standard) is placed on a balance, its force will read as 1000g. Then any other weight that is put on the balance will be measured against this standard. If it has half the mass it will have half the force on the balance and it will read half

If this balance is moved to a place where the gravity is different, it will display a different value as the force will be different. This is what happens as you move around the world.

Our Planet is almost a sphere, but not a perfect one. The poles have been squashed down by millions of years of spinning and the equator bulges slightly. If you stand at the poles you are slightly closer to the center of the Earth than if you stand on the equator. As you move closer to the center of the Earth, the force due to gravity will be slightly greater. As you move away from the center it will be less. Likewise, if you climb a mountain you move further from the center and the force is less.

Different balances will react differently to a change in location. A less sensitive balance, say readable to 1.0g, may not be able to measure a change in gravity when it is moved to a different location. More sensitive balances, such as those found in laboratories, will more readily display the difference in gravitational forces. On the most sensitive laboratory balances it is possible that a very small difference in location can cause large changes to the balance's calibration. For example an analytical laboratory balance capable of weighing 100g readable to 0.0001g can detect very small changes in gravity.

If the balance is calibrated with a 100g mass and then moved upstairs in a building say 10 meters, about 3 floors, the change in gravity will cause the balance to measure the 100g mass as 99.9970g, or 0.0030g less because it is further away from the center of the Earth.

See Appendix A for details of how the value for gravity changes over the Planet.

APPENDIX A
Variations in Gravity as the Latitude and Altitude varies 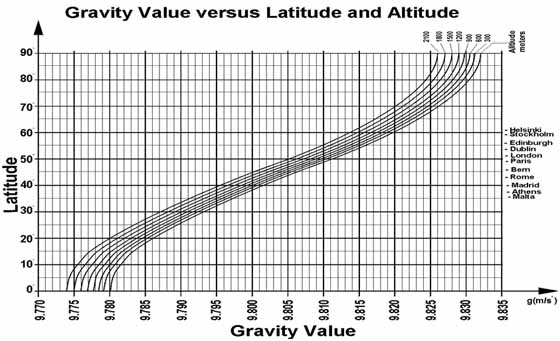