Reprinted with permission of THERMO

The purpose of this tutorial is to introduce basic concepts of centrifugation, including vocabulary, centrifuge and rotor types, separation techniques, and even gradient selection. For further details regarding centrifugation, please refer to the Sorvall® and Heraeus recommended reading the literature cited in the reference section.

Centrifugation is one of the most important and widely applied research techniques in biochemistry, cellular and molecular biology, and in medicine. Current research applications rely on isolation of cells, subcellular organelles, and macromolecules, often in high yields.

A centrifuge uses centrifugal force (g-force) to isolate suspended particles from their surrounding medium on either a batch or a continuous-flow basis. Applications for centrifugation are many and may include sedimentation of cells and viruses, separation of subcellular organelles, and isolation of macromolecules such as DNA, RNA, proteins, or lipids.

II. Increasing the effect of gravity: the centrifuge.

Many particles or cells in a liquid suspension, given time, will eventually settle at the bottom of a container due to gravity (1 x g). However, the length of time required for such separations is impractical. Other particles, extremely small in size, will not separate at all in solution, unless subjected to high centrifugal force. When a suspension is rotated at a certain speed or revolutions per minute (RPM), centrifugal force causes the particles to move radially away from the axis of rotation. The force on the particles (compared to gravity) is called Relative Centrifugal Force (RCF). For example, an RCF of 500 x g indicates that the centrifugal force applied is 500 times greater than Earth’s gravitational force. Table 1 illustrates common centrifuge classes and their applications.

Table 1. Classes of centrifuges and their applications

() = can be done but not usually used for this purpose. 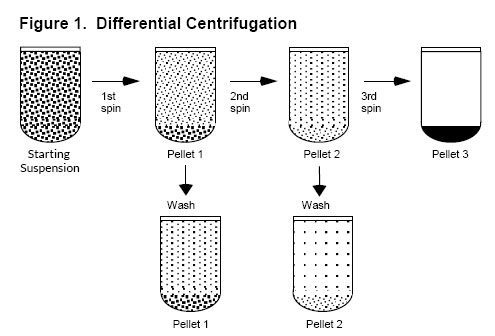 Separation is achieved primarily based on the size of the particles in differential centrifugation. This type of separation is commonly used in simple pelleting and in obtaining partially-pure preparation of subcellular organelles and macromolecules. For the study of subcellular organelles, tissue or cells are first disrupted to release their internal contents. This crude disrupted cell mixture is referred to as a homogenate. During centrifugation of a cell homogenate, larger particles sediment faster than smaller ones and this provides the basis for obtaining crude organelle fractions by differential centrifugation. A cell homogenate can be centrifuged at a series of progressively higher g-forces and times to generate pellets of partially-purified organelles.

When a cell homogenate is centrifuged at 1000 x g for 10 minutes, unbroken cells and heavy nuclei pellet to the bottom of the tube. The supernatant can be further centrifuged at 10,000 x g for 20 minutes to pellet subcellular organelles of intermediate velocities such as mitochondria, lysosomes, and microbodies. Some of these sedimenting organelles can obtained in partial purity and are typically contaminated with other particles. Repeated washing of the pellets by resuspending in isotonic solvents and re-pelleting may result in removal of contaminants that are smaller in size (Figure 1). Obtaining partially-purified organelles by differential centrifugation serves as the preliminary step for further purification using other types of centrifugal separation (density gradient separation).

Density gradient centrifugation is the preferred method to purify subcellular organelles and macromolecules. Density gradients can be generated by placing layer after layer of gradient media (Table 2) such as sucrose in a tube with the heaviest layer at the bottom and the lightest at the top in either a discontinuous or continuous mode. The cell fraction to be separated is placed on top of the layer and centrifuged. Density gradient separation can be classified into two categories. 2a. Rate-zonal (size) separation. 2b. Isopycnic (density) separation.

Certain types of rotors are more applicable for this type of separation than others. Please See rotor categories (below) and Table 2.

In this type of separation, a particle of a particular density will sink during centrifugation until a position is reached where the density of the surrounding solution is exactly the same as the density of the particle. Once this quasi-equilibrium is reached, the length of centrifugation does not have any influence on the migration of the particle. A common example for this method is separation of nucleic acids in a CsCl gradient. Figure 3 illustrates the isopycnic separation and criteria for successful separation. A variety of gradient media can be used for isopycnic separations and their biological applications are listed in Table 2.

Rotors can be broadly classified into three common categories namely swinging-bucket rotors, fixed-angle rotors, and vertical rotors (Figure 4, Table 3). Note that each type of rotor has strengths and limitations depending on the type of separation.

Other rotors include continuous flow and elutriation rotors.

Table 3. Types of rotors and their applications

In swinging bucket rotors, the sample tubes are loaded into individual buckets that hang vertically while the rotor is at rest. When the rotor begins to rotate the buckets swing out to a horizontal position (Figure 4). This rotor is particularly useful when samples are to be resolved in density gradients. The longer pathlength permits better separation of individual particle types from a mixture. However, this rotor is relatively inefficient for pelleting. Also, care must be taken to avoid “point loads” caused by spinning CsCl or other dense gradient materials that can precipitate.

In fixed-angle rotors, the sample tubes are held fixed at the angle of the rotor cavity. When the rotor begins to rotate, the solution in the tubes reorients (Figure 4). This rotor type is most commonly used for pelleting applications. Examples include pelleting bacteria, yeast, and other mammalian cells. It is also useful for isopycnic separations of macromolecules such as nucleic acids.

In vertical rotors, sample tubes are held in vertical position during rotation. This type of rotor is not suitable for pelleting applications but is most efficient for isopycnic (density) separations due to the short pathlength. Applications include plasmid DNA, RNA, and lipoprotein isolations.

Table 4 and Table 5 illustrate properties of centrifuge tubes and the proper rotors in which they should be used.

*For more information, please check our chemical resistance chart available on this site.

Selection of the appropriate centrifuge tube:

Major factor in selection of a tube (plastic) material:

To prolong tube life and avoid breakage or collapse:

Example of a rotor conversion:

Disclaimer: Cole-Parmer products are not approved or intended for, and should not be used for medical, clinical, surgical or other patient-oriented applications.