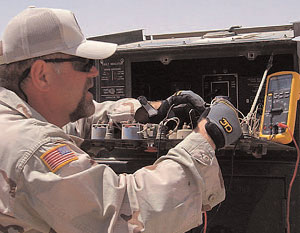 Robert Kirkman is a civilian employee working for the
Dept. of the Army Communications and Electronics Command headquartered in Ft. Monmoth, NJ.

Toward the end of July, 2004, Kirkman sent an email to the FlukePlus direct support address, asking for help with some of his Fluke tools. Sir, Im currently deployed to Iraq and Kuwait. I have been using my Fluke 87-III DMM here in the desert, but the display goes black quite regularly from the heat. Any suggestions? He went on to describe the specifics. The ambient temperature is between 118 and 130 ºF, and exposure in direct sunlight can easily add another 20-30 degrees or more. So far the meters have recovered after several hours in air conditioning, but this causes a severe inconvenience when troubleshooting equipment. I am using the tools to work on power generation equipment, power distribution and environmental control systems. The equipment I work on provides our soldiers electricity for combat systems and the HVAC to make their lives here a little more comfortable. In my specialty we have seven people deployed between Iraq, Kuwait and Afghanistan.

At first, Smith was concerned, since most of the liquid crystal displays used in Fluke DMMs are specified to operate up to 130 degrees Fahrenheit. Then he re-read Kirkmans letter and saw the problem: direct sunlight. As he told Kirkman, Continued exposure in direct sunlight at the ambient temperatures youre experiencing in Iraq would far exceed the displays operating temperatures.

Kirkman said he understood. I want you to know that I am not complaining about Fluke products. I have been using them for close to 30 years and am very satisfied with them. This environment is very extreme and most equipment we use was not designed for it. You cant leave any electronic equipment (digital camera) in vehicles, as the heat causes everything to fail. When the displays go black, I pack the meters with ice bottles. As they cool off, they start to come back in. 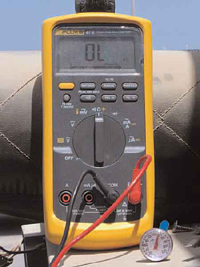 Soon after, Kirkman reported back. Thanks for your suggestion. Exposure to sunlight might be causing the problem, since most of the equipment I work on is in direct sunlight and it is very extreme. Im keeping the other meters covered with a towel and the displays have worked so far today. Thanks for your continued support. Your quick response means a lot.

As Kirkman continued minimizing the direct sunlight exposure over the next few days, the up-time of his Fluke test tools improved substantially.

Meanwhile, Smith had an idea. Fluke had recently introduced a new generation of the popular Fluke 87 digital multimeter, the 87V. The company had gone to great efforts to further improve the DMMs acclaimed ruggedness and reliability. In particular, the 87V had a bigger, brighter display with larger numbers and a backlight, in addition to new temperature and ASD shielding functions. What better test than the Iraqi desert? Duane asked Kirkman to put one to use.

After using the new meter for several weeks Kirkman wrote back. I have been using the meter near Basra, Iraq. The equipment pictured is a tactical network switch, satellite, and 10 KW power unit. The meter is working very well so far, and the conditions are 127 ºF, extremely sunny, windy and dirty.

He added: My coworkers are very envious of my new meter. They work on the inside of the shelters and their equipment is all air conditioned, so they tease me about being the outside guy. Some of our older equipment is easier to maintain than our digital stuff. Ive used Fluke products for a long time in many different countries and environments, and Im always impressed with the reliability, even when it has been abused. Thanks for making reliable quality products.