Case Study: Tangerine Dreams— Irrigating a Citrus Grove with the Help of Masterflex

"Since my water flow rates can vary from 20 to 250 gallons per minute (GPM) depending on need, the pump and tubing combination is ideal"


Imagine standing in the middle of a citrus grove surrounded by tangerine trees. It is summer in the San Joaquin Valley, the sun is hot, and neighbors in this agricultural center of California are focused on delivering a plentiful harvest.

Sprinklers shoot water fed from melted snow off of the Sierra Nevada mountain range. The water pools in lakes and reservoirs and is distributed to crops in the community as the primary source of irrigation. On the Earthly Delights Farm, 10 acres of trees are showered throughout the day. Along with the crop-sustaining water, the microsprinkler system collects detrimental sand, dust, and other particulates, as well as a thriving algae population.

Since 1998, Ronny Tannenbaum has owned and operated the Earthly Delights Farm in Tulare County. To boost water pressure through his irrigation systems, he added a centrifugal pump. Yet, with friction losses and diverging land elevations causing the pressure to vary, he added pressure compensators as well for greater uniformity.

Tannenbaum also checked the sprinklers regularly for clogs and found they were plugging frequently. So, he performed field cleaning. For a couple of thousand sprinklers, this added up to more time and effort than he wanted to sacrifice.

“It became a hassle, which I lived with throughout last summer and the beginning of this summer,” he said. The existing sand media filters cleaned the water of particulates, but had no effect on the algae, which was growing out of control.

Tannenbaum investigated his options. He discovered that injecting small amounts of chlorine into the water would control the algae. Farmers using drip irrigation, a slow, low-pressure process, were injecting chlorine into their systems. For some, using chlorinators (non-pressurized chambers like those used in pools) delivered uniform rates of chlorine. With dry tablets of the chemical, it dissolved at a known rate and the solution was pumped into the main system.

Armed with this information, Tannenbaum considered how he would apply it to his grove. His situation was complicated in that he didn’t always irrigate the entire grove at once. Because he has different soil types that need distinct amounts of waters—which impacts the quality and yield of the fruit—the grove has more than one zone. Some irrigation requires 250 gallons a minute while others substantially less.

After researching chlorine, he discovered it is chemically aggressive, which makes it hard on steel and unusable with certain plastics―and it is unstable, especially in hot weather.

To inject chlorine into the irrigation system and avoid some of the drawbacks of using a chlorinator, he needed a pump that could sustain the corrosive effects of the chemical, as well as easily vary the flow rate.

Already familiar with peristaltic pumps, Tannenbaum remembered that by moving a dial on the pump the flow rate changes. His hunch was that the right peristaltic pump could be the answer.  He contacted us and spoke with technical application specialists, who directed him to the Masterflex L/S® Economy Variable-Speed Digital Drive, L/S® Easy-Load® Pump Head for Precision Tubing, and Norprene® pump tubing. 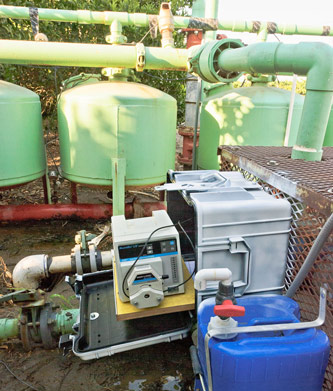 With the Masterflex L/S pump system, the chemical only comes in contact with the tubing, which is relatively easy and inexpensive to replace. This is especially important because it can also pump agricultural chemicals including herbicides which can eat up seals and other parts on equipment.

“The advantage of this peristaltic pump system is that the system itself is isolated from the chemical—only the tubing comes in contact with it,” said Tannenbaum.

While a diaphragm pump might cost less, it could not handle the low flow rate he required.

Before making his purchase, Tannenbaum wanted to make sure the tubing would hold up to the sodium hypochlorite solution while maintaining ultraviolet (UV) stability. UV rays are known to break plastics down. “With the Norprene tubing, I was satisfied that it would do the trick,” he said.

Tannenbaum implemented the system in early June, injecting the solution at the inlet side of the centrifugal water pump. The algae began to vanish.

“Now, I’m happy to say that the algae are almost a thing of the past. I’ve tweaked some variables, switching to a 6% solution that I’ve found is more stable. Since my water flow rates can vary from 20 to 250 gallons per minute (GPM) depending on need, the pump and tubing combination is ideal. With an easy push of a few buttons, I can set the right chlorine solution flow rate. Without any changes besides setting the flow rate, this system could treat up to 1,000 GPM if needed,” he said. “I’d recommend it.”