Analysis of PAHs using Gas Chromatography with FID or MS

Capillary gas chromatography with flame ionisation detection (FID) or mass spectrometry are the techniques most frequently used for analysing the 16 PAH's targeted by the US EPA. Although there are only 16 compounds in this separation, many problems are encountered with this analysis. These include:

Trajan SGE offer the BPX5, BPX35 and HT8 range of columns which overcome all of these problems.

For rapid analysis of PAH’s not requiring the separation of the benzo (b) and (k) fluoranthene isomers the HT8 range of columns are the best choice. Figure 1 shows the separation of all 16 EPA nominated PAH's (with the exception of the two benzofluoranthene isomers) in only 18 minutes. This short analysis results from the ability of HT8 columns to operate routinely at very high temperatures. Column bleed levels are also extremely low. This is well illustrated in Figure 1 where effectively no baseline change is observed even when the final temperature is 380 °C. 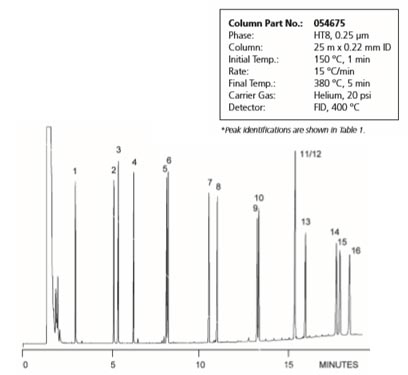 Figure 2. Selectivity of the HT8 Column 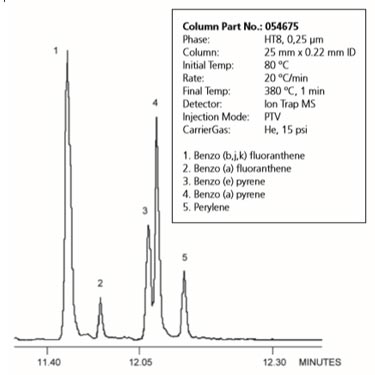 Although separation of all benzofluoranthene isomers cannot be achieved by the HT8 column certain other PAH isomer separations can be performed which are difficult to achieve using conventional polysiloxane phases. Illustrated in Figure 2 the separation of benzo (e) pyrene and perylene from benzo (a) pyrene is easily achieved with the HT8 column even with a temperature program rate of 20 °C/min.

Resolution of all 16 EPA PAHs 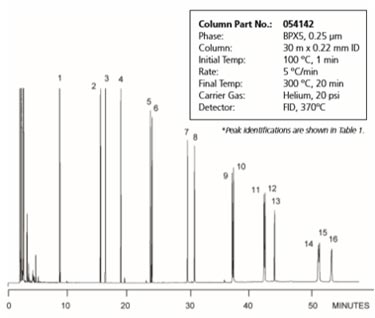 The BPX5 and BPX35 range of columns (5% and 35% phenylpolysilphenylene-siloxane respectively) provide excellent separation of the problem PAH's pairs:

BPX5 and BPX35 columns also have column bleed levels like the HT8 range of columns. These low levels ensure that positive identification and accurate quantitation of the late eluting PAH's (above 300 °C). Figure 3 is a chromatogram obtained using the BPX5 column. 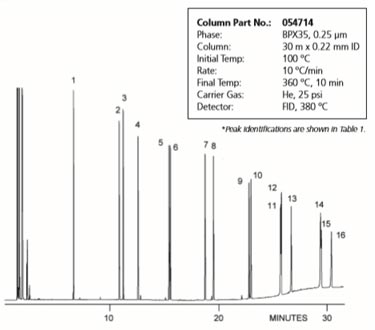 Figure 4 is a chromatogram of the 16 EPA PAH's obtained using the medium polarity BPX35 column. Medium polarity columns like the BPX35 have always been popular for PAH applications. However, due to the restricted upper temperature limits and high column bleed levels non-polar columns like the BPX5 are more commonly used. This is not the case for the BPX35 column. With a maximum operating temperature of 370 °C and column bleed specifications similar to a BPX5 column these problems have been eliminated. As a result, higher operating temperatures can be used reducing the analysis time for the 16 PAH's to approximately 30 minutes.