Studying isolated pieces of DNA is nearly impossible. Large amounts of a sample of DNA are necessary for molecular and genetic analyses. Sometimes called molecular photocopying, conventional polymerase chain reaction (PCR) is a technique used to amplify (replicate) trace amounts of DNA and RNA from a sample. A PCR thermal cycler is used to produce the large amounts required for research.

Four components (reagents or chemicals) are needed for the PCR process:

The PCR process has 4 steps:collection, preparation, amplification, and post PCR clean-up. The PCR machine steps happen in the amplification step. It begins with a segment of a DNA sample placed in a suitable tube along with the reagents and chemicals listed above. The tube is placed into the PCR machine or thermal cycler. The thermal cycler takes the solution through a 3-step process: denaturation, annealing, and extension.

The solution contained in the tube is heated to at least 94°C (201.2°F) using a thermal cycler. The heat breaks the hydrogen bonds of the original DNA sample and separates the DNA into single strands (this is termed denaturation of double-stranded DNA).

The sample mixture is then cooled to between 50 to 60°C (122 to 140°F) allowing the DNA primers and the DNA polymerase enzyme to bind to the individual strands of DNA that were separated by the heat (this is termed annealing of the primers). At this point, the nucleotides (A, T, C, G) from the added mixture solution will pair with the individual separated strands of DNA that resulted from the heating process.

Once joined together, they form a new complementary strand of DNA (termed extension of the DNA). Thus, a new duplicate double-stranded DNA molecule has been formed from each of the single strands of the original sample molecule. The temperature cycles from 95°C to 50 to 60°C. The cycle is then repeated about 35 to 40 times using the thermal cycler which automatically repeats the heating and cooling cycles of the process. Resulting DNA sequence is doubled each time the heating/cooling cycle is conducted by the cycler. Thus, what started out as a single short segment of DNA from one sample can be amplified to form millions of copies after 35 doubling cycles. 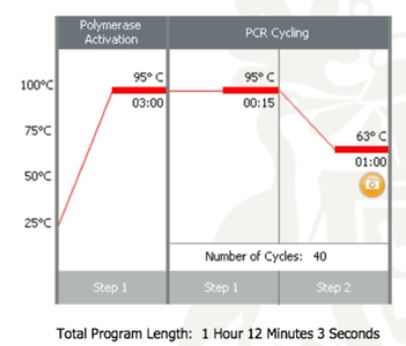 Flow chart of the three main steps of PCR with the PCR temperature cycle, number of cycles, and total program length.

This process provides a new duplicate double-stranded DNA molecule formed from each of the single strands of the original sample molecule. This three-step process is done 35 to 40 times to amplify the DNA/RNA into millions of duplicate segments.

Once the PCR process is completed, the resulting amplified (replicated) segments generated can then be compared to other nucleotide segments from a known source. The PCR-generated nucleotide sequences are then placed next to known nucleotide sequences from humans, pathogens, or other sources in a separating gel. Electrical current is then run through the gel, and the various nucleotide sequences within the gel form bands that resemble a ladder, according to their electrical charge and molecular size. This is termed gel electrophoresis. Bands or ladder-like steps that migrate to the same levels in the gel show identity of nucleotide sequences. This method is one of the most popular ways PCR tests are completed.

qPCR is a variation of conventional PCR and allows analysis of the amplified/replicated DNA in real-time during the usual 40 cycles of the procedure using fluorescent dyes. The fluorescent dyes attach to some of the nucleotide strands allowing users to measure specific products and their amounts during the amplification/replication cycles. Special thermal cyclers, known as real-time thermal cyclers, are used for qPCR. As well as heating and cooling the tubes containing the PCR reagents, they can measure the fluorescence inside the tube at every cycle. This allows users to skip the gel electrophoresis or other secondary procedures needed for final analysis of the PCR products, thus producing more rapid results.