Reprinted with permission from Megger 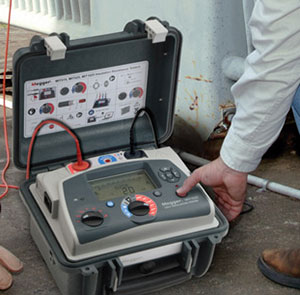 The testing of electrical insulation has seen the development of numerous specific procedures with the intent of examining and stressing insulation quality in different ways in order to call attention to different possible issues and problems. Insulation resistance is, of course, designed to be of a high value in order to keep circuitry isolated from other circuitry and from ground. Over time, just the wear and tear of normal usage will cause insulating material to degrade and reduce its insulating quality. Added to this process are localized and sometimes catastrophic events such as voltage spikes and surges, water ingress and the incursion of contaminants that will both speed and heighten the process of degradation. Consequently, insulation resistance is tested both as a maintenance procedure, to keep equipment within desired operational parameters, and as a troubleshooting function, in response to known or suspected problems.

Simply taking a spot resistance reading with a megohmmeter is often all that is required of a given situation. But at other times, more exhaustive testing is in order to identify the problem. These are typically the bedeviling “intermittent faults”, where equipment successively runs and trips. An added goal of preventive electrical maintenance is to anticipate such contingencies before they develop and take measures to head them off. Accordingly, numerous procedures have been developed that make use of the insulation tester to give information well beyond the mere resistance number at a given time.

By way of quick review, insulation resistance testing is accomplished by the application of a comparatively high voltage (typically on the order of system-rated to twice system-rated) across a body of insulating material and measuring the amount of current, called “leakage”, that gets through the material; in essence, going where it’s not supposed to go if equipment were operating well. The amount of current is miniscule; micro- or even nano-amps. By the time the natural degradation process has permitted leakage current to reach levels as “high” as milliamps, the insulation is breaking down and soon will no longer be doing its job. On a 120V circuit, the human body normally begins to fell a “tingle” at about half a milli-amp.

One of the fundamental test procedures developed early in the use of megohmmeters (circa 1950) is the familiar and popular Step Voltage Test. Put simply, this is an examination of the response of the insulating material, in terms of resistance, to increasing voltage stress. Within broad parameters, “good”insulation should be able to stand up to increases in voltage. But if the material is deteriorated, each voltage increase will exploit additional leakage paths by pulling current through more and more cracks, burn tracks, water trees and the like. As voltage increases, current increases, and resistance drops accordingly.

As the testers themselves have developed over the years, the implementation of this test has become simpler. As long as more than one test voltage is available, a simple Step Voltage Test can be performed manually. But modern testers have multi-voltage selection that reads directly, without having to adjust the reading to the voltage as was necessary with older models. Such units can easily perform the test manually, by turning the selector switch, noting the time and marking down measurements. Even more advanced megohmmeters do the whole thing automatically. Typically, only the voltage ceiling need be selected and the Step Voltage mode engaged, and such models will run the test automatically, displaying all relevant data at the conclusion. Accordingly, an industry-standard procedure has evolved where five successive voltages are applied for one minute each. If a 5 kV ceiling is selected, the test will run at 1, 2, 3, 4, and 5 kV for one minute each, a total of a five-minute test. As always with insulation resistance testing, comparison to previous results is the best evaluation, but for sake of perspective, a general rule is that more than a 25% change indicates an excess of contaminants (Fig. 1). 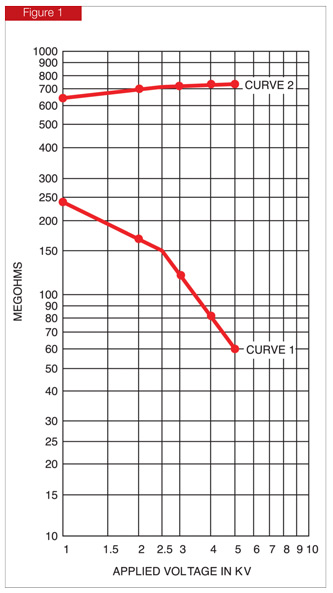 One of the principle values of this test is that it can reveal problems that may have been overlooked in the results of other tests. An example is the single point of localized damage in otherwise good insulation. A voltage spike may have caused a pinhole. With air (a good insulator) now filling the space previously occupied by insulating material, a spark gap exists that may go unnoticed by a simple resistance measurement. This can also be the source of an aggravating intermittent failure problem. But the Step Voltage Test may well arc the spark gap and expose the flaw. Similarly, aged insulation, by virtue of drying out, may yield a deceptively high value against a single resistance test. But such material often has cracks and similar flaws that make the equipment poised on the verge of breakdown. A Step Voltage Test will pull more current through more of these flaws with each increase, and readily reveal an impending failure.

The increasing sophistication of modern megohmmeters has led to a refinement of the Step Voltage concept to a whole other level, the Ramp Test. Rather than increasing test voltage in discrete jumps (industry standard are 500 V and 1 kV increments), the ramp test applies voltage in a continuous increase at a constant rate, up to the selected maximum.

The response of the insulating material to voltage can be assessed in a much subtler and more detailed manner, without the jarring effects of quantum leaps. Small defects can be detected more readily, and equipment that is on the verge of breakdown can be analyzed without risking damage. Leakage current is graphed continuously against voltage rise. Normally, the relationship would be expected to be linear, but if current begins to rise more sharply, the material is breaking down and the test can be terminated prior to the occurrence of full breakdown.

The Ramp Test has been evaluated by standards agencies, and is described in IEEE 95-2002, The IEEE Recommended practice for insulation testing of AC electric machinery (2300 V and above) with high direct voltage. The recommended rate of voltage rise from the standard is 1 kV per minute. Some testers may also permit adjustment of this rate. The IEEE standard conveniently provides graphs of current curves of typical problems, for comparison of test results. Defects like cracks, voids, delamination, moisture ingress, surface contamination and uncured resin may all be detected. The IEEE has recommended the method especially for epoxy-mica, polyester, and asphalt materials. (The standard also prescribes that the equipment under test be first subjected to an insulation resistance or Polarization Index test according to IEEE 43-2000 so as to assure that the equipment is suitable for higher voltage testing.)

The evaluation of test results first prescribes that insulation in good condition should produce a smooth, almost linear rising current curve against the applied voltage. Any deviation should be viewed as a warning that the test could be approaching a possible breakdown. A sudden increase in current usually indicates imminent breakdown, and it has been possible to approach as closely as 5% below breakdown voltage. An abrupt drop in current is rare, but if it occurs when test voltage is above peak operating voltage, it can also be an indication of imminent breakdown. Comparing the curves of asphalt-mica to epoxy-mica shows that asphalt-mica has a higher level of absorption current, resulting in a steeper curve. But both produce clean, linear graphs when in good condition (Figs. 2 & 3).

By contrast, insulation having absorbed moisture produces a sharp rise in current, and the test would have been stopped (Fig. 4). Old asphalt may produce a slightly non-linear response showing small deviations as “blips”, whereas significant localized weaknesses will show a sudden, larger increase (Fig. 5). The test would be terminated as the graph approached vertical. Cracks in ground wall insulation will show a sudden near-vertical rise, often preceded by small spikes (Fig. 6). It is also useful to compare the current curves from different phases. All three should provide comparable results. A phase that shows a different response usually indicates a problem with insulation condition (Fig. 7).

Among the ticklish problems that this technique has been successfully used to identify are tape separation, end-arm partial discharge and contamination, delamination andlack of resin cure. As an example, an 11 kV 21 MVA hydro transformer installed in 1928 was tested and yielded an acceptable PI of 3.8 on asphalt-mica insulation. A simultaneous ramp test graph, however, showed instability as low as 5 kV (Fig. 8).

The winding was prone to overheating due to the cooling ducts in the core becoming blocked by oily dirt. The stator was eventually rewound. Similarly, tests were made on an asphalt-mica-insulated 13.8 kV winding of a hydro generator installed in 1961. After 37 years in service, repairs were made near the stator frame, and involved the use of water. Testing revealed leakage current in excess (Fig. 9), and a dryout did not improve the measurements. The results of partial discharge and ramp tests suggested the loss of a bond between layers of mica tape. A rewind was finally performed, with a rating increase from 37.5 to 50 MVA. Another example is that of a 13.8 kV roebel bar winding in a hydro generator that was not ramp tested upon installation. Ramp testing was performed shortly after the results of 3 and 1 short circuit tests (Fig. 10), and physical damage in the end arm area was suspected. This proved not to be the case, and a ramp test still showed leakage 2 years later. But after another 5 years, the condition had disappeared. The conclusion was that test results reflected the curing of epoxy-mica.

In such manner, ramp test results are a useful tool in clarifying vague or conflicting data from other tests, and in identifying specific problems on equipment known to be faulted yet showing acceptable results against other procedures.