AVAILABLE IN: English
Reprinted with permission of Eutech Instruments 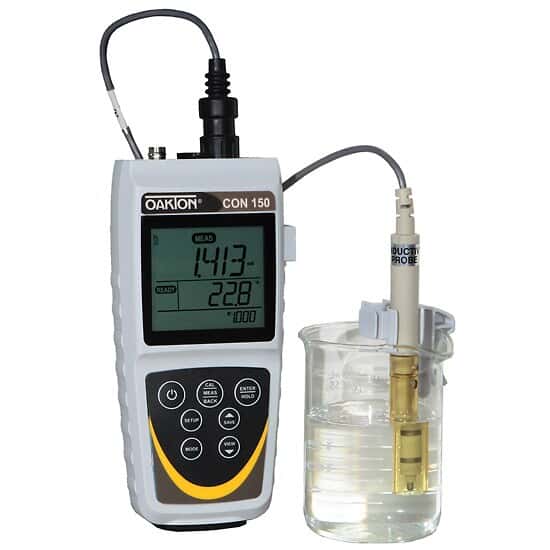 The conductivity process in aqueous solutions is by means of ionic motion, and is different from that of metals. The conductivity invariably increases with increasing temperature, opposite to metals but similar to graphite. It is affected by the nature of the ions, and by viscosity of the water. In low ionic concentrations (very pure water), the ionization of the water furnishes an appreciable part of the conducting ions. All these processes are quite temperature dependent, and as a result, the conductivity has a substantial dependence on temperature. This dependence is usually expressed as a relative change per degree Celsius at a particular temperature, commonly as percent/°C at 25°C, and this is called the slope of the solution.

Ultra-pure water has by far the largest slope, 5.2%/°C, while ionic salts run about 2%/°C in the middle ranges. Acids, alkalis, and concentrated salt solutions run somewhat lower, typically 1.5%/°C. Non-aqueous materials such as oleum (H2SO4 with dissolved SO2) and conducting organics have quite different temperature dependences. From these figures, it is obvious that a small difference in temperature makes a large difference in conductivity, and the effect is very troublesome when a high degree of accuracy is required. In making conductivity readings at high and low temperatures, the data is usually normalized to 25°C, i.e. it is stated as what the reading is with a 25°C solution.

Fortunately, temperature sensors are available which have characteristics similar to those of the solutions to be tested. By the use of supplement resistors and electroniccircuitry, the temperature-conductance curves can be shaped to match closely any aqueous solution. The temperature sensor and its associated network are then used as a gain control element in the monitor circuitry, and the conductivity reading is brought to its equivalent value at 25°C.

A modern technique uses a microprocessor and an associated "lookup table" which contains the temperature response data of the solution. The solution temperature is measured and converted to digital form. From this information and the data in the lookup table, a temperature compensation can be derived, with accuracy limited only by the number of data points which are placed in the table. Compensation curves are available for all common solutions. Other solutions can be estimated by the examination of similar materials.