Oil and Grease (O&G) is the most method defined of all method defined parameters. For reasons that we will explore later, a better name for this particular test would be HEM (Hexane Extractable Material). While it is somewhat easy to say “oil and grease” and have a good idea of what is meant, it is quite difficult to come up with a good scientific definition and even harder to design a selective test. Depending on the specific origin of the material they can foul up water treatment processes, impart unpleasant odors or tastes to the water, or look unpalatable. 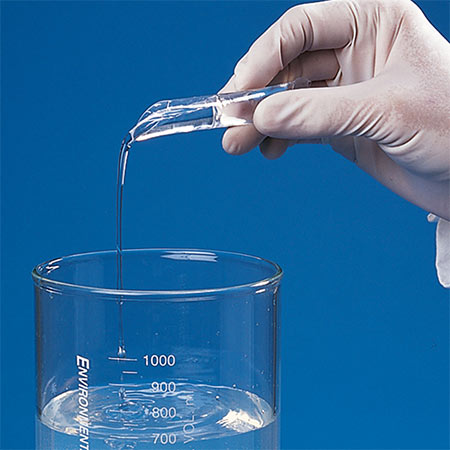 Hexane is used to extract material (ideally just oil and grease) from an acidified aliquot of the sample stream. The hexane is evaporated and the entire amount of residue left behind is defined as oil and grease.

What you should know

As mentioned previously, a better name for this test is HEM. This is because, while the common perception of oil and grease will be recovered by this method, other materials which are not oil or grease will also be detected. To make matters worse, some materials that you would think should be included are not. Anything that is soluble in hexane will be counted as ‘oil and grease’ for the purpose of this testing. This includes some dyes, sulfur, and substituted hydrocarbons but does not include some heavier petroleum residuals.

There are two main components of oil and grease, petroleum-based hydrocarbons (now referred to as ‘nonpolar materials’) and fatty compounds of animal or vegetable origin. They can either be determined as a whole or as just the non-polar material, with the animal/vegetable material being the difference between the two. The differentiation between the two is done by adding an extra step involving silica gel. Once again, these two categories are purely method defined. Anything left over after silica gel treatment is a non-polar material.

Method 1664 specifically deals with a liquid-liquid extraction procedure. This involves transferring your sample into large separatory funnels and adding 30 mL of hexane. The sample and solvent are agitated and then allowed to separate. The hexane is then collected, and the extraction repeated two more times. Because hexane is lighter than water, the entire sample volume must be drained from the funnel, usually back into the sample container, before the hexane can be collected. Care must be taken to carefully vent during the agitation to avoid potentially dangerous buildup of pressure from the fumes. Often during the agitation process an emulsion will form between the organic and aqueous layers. This can cause significant delays in the extraction process. The method does allow alternative extraction methods provided they adhere to the method definition. Solid phase extraction (SPE) is the most widely known and used of these alternatives. SPE is accomplished by passing the sample through a material which retains the HEM components. The HEM is than extracted by rinsing with solvent to carry the HEM into a collection dish or flask. This method has the advantage of reduced solvent usage (often more than 50% less), no dangerous pressure buildup, and avoiding the formation of emulsions.

Because this is a method defined parameter there are certain requirements to which one must adhere in order to stay within that definition. The most important one is the solvent of choice. Whether you choose liquid-liquid, Soxhlet, or some sort of SPE method you must use n-hexane and only n-hexane as the active solvent. There are certain Standard Methods that are not allowed because they use a mix of solvents in the procedure. If using solid phase discs that require activation (typically with methanol) before the sample is filtered, all traces of that solvent must be removed before the sample is eluted from the disc. Another crucial step is the evaporation temperature. Standard Methods recommends 85 °C while 1664A says 70 ± 2 °C. 1664B simply says to adjust the temperature as appropriate. The lower temperature lends itself to better standard recovery as you have less of a chance of volatilizing some of the lighter weight organics. Still lower evaporation temperatures would allow for losing less material to volatilization at the expense of longer evaporating times.

When performing an analysis for HEM you must always use whole volume samples. Because the HEM constituents are typically not water soluble, the sample is not homogenous with respect to the analyte of interest. Almost all components of HEM will be found either on the surface of the sample or adhering to the walls of the container. Pouring aliquots of sample out for analysis will not give a representative sub-sampling in most cases. One final step to keep in mind is to always acidify your blanks and other standards. Failure to do so will result in incomplete recovery of your standards.

Learn more about wastewater: What is Wastewater?