Biofuels Testing and Production: A Q&A with Dr. Raj Shah 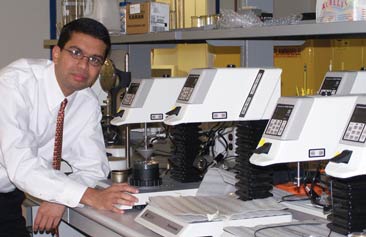 Cole-Parmer asked Dr. Raj Shah, a foremost expert in biofuels, to discuss the opportunities and challenges that currently face these fuel sources. Dr. Shah serves as the Director of Sales, Marketing, and Technical Services for Koehler Instrument Company. He is currently on the industrial advisory board at the engineering department of Hofstra University, NY, and also on the advisory board of State University of New York at Stony Brook, Department of Chemical Engineering. He is an active member of ASTM, STLE, NLGI, SAE, ACS, and AICHE and chairs subcommittees in several of these organizations. He has authored and coauthored more than 50 publications and a reference bestseller, Fuels and Lubricant Handbook: Technology, Properties, Performance and Testing. Dr. Shah holds a Ph.D. in chemical engineering from Pennsylvania State University.

Q: Biofuels-related topics are abundant in today’s news. From commercial airlines powering their jets with biofuel to the food vs fuel debate in biofuel production, the dialogue is both dynamic and passionate.

What do you see as the significant issues in biofuels right now?

A: Most biofuel-related issues can be traced back to the source: feedstock (including vegetable oil). The cost of feedstock used to produce biodiesel is high due to limited availability. Aside from its use as an energy source, it is a primary source of food for human nutrition. This is the essence of the food vs fuel debate. A fraction of vegetable oil is available for nonfood use. With a limited supply of land for crops, a dilemma emerges as to how much can be used for biofuel production.

For years, the main argument against biofuels has been the cost of production. Biodiesel prices must remain low because they are linked to the diesel price with which it is blended. Meanwhile, feedstock used to produce biodiesel is also a globally traded commodity whose price is determined by the balance between supply and demand in the market. Demand for the commodity increases as more biodiesel production occurs, which in turn leads to shortages in supply. In order for the two to reach equilibrium, the price of feedstock is raised to lower the demand. This in turn increases the cost of production—which is already criticized for being too high.

Additionally, newer issues have emerged involving agrofuels, such as ethanol and biodiesel, which are manufactured from crops grown on a massive level to be used purely for biofuel. These agrofuels have been chastised not only for their negative impact on the price of food, but for other environmental reasons including their absorption, during production, of thousands of gallons of fresh water. Biofuel production from ethanol requires a greater quantity of water than gasoline. This high volume may increase the stress on water supplies in vulnerable areas of a producing country. The surge in corn production for the use of fuel has been blamed for the rising presence of air pollutants such as particulate matter, ozone, and sulfur oxides. Ethanol production has also contributed adversely to surface and ground water, with effects including eutrophication (an increase in supply of organic matter in an ecosystem), hypoxia (reduced oxygen level in a body of water), and harmful algal blooms.

Finally, there is great uncertainty surrounding the effectiveness of biofuels in reducing greenhouse gases. Much depends on how the biofuels are produced and how the land is used. There is a good possibility that as a greater supply of ethanol is needed, uncultivated crop land will need to be cultivated. As a result, plants grown for the sole purpose of being cut down to produce fuel will replace naturally existing, carbon-dioxide-reducing plants. This will result in an increase in the quantity of carbon dioxide in our atmosphere.

Underlying all of these biofuel production issues is the need to globally standardize testing for quality. Currently the United States has one set of standards, Europe has another, and so forth. Without a definitive worldwide common standard, the quality of a particular sample of biofuel may vacillate widely. This diversity is a challenge in producing and distributing biofuels worldwide. For the last few years, ASTM has worked to create common standards. This is still in progress but moving in the right direction.

Q: In your opinion, what fuel source will the US depend on in upcoming years? 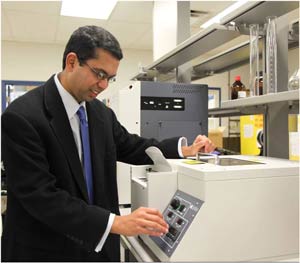 However, the key for biofuels in the future is going to depend on cellulosic biofuels. These fuels, produced from nonedible plant matter, are known as second generation biofuels. Second generation biofuels solve the ongoing food vs fuel dilemma and contain environmental advantages as well. Cellulosic biofuels are made from switchgrass, willow, and other fast-growing plants with high cellulose content. The biomass of the plant materials are converted through pyrolysis (a heat treatment at 260 degrees Celsius) to sludge. This mixture can be easily stored and retains about 90 percent of its original bioenergy.

In the meantime, our main fuel source will continue to be petroleum, as it is right now. The next will be natural gas, with liquefied coal also as a potentially good option. We also see nice progress in shale energy resources recently in the USA.

Q: What do you see happening on the international landscape with biofuels?

A:  The answer to this question depends on where we look in the world. Let us take the example of two different developing economies.

India shows great promise in entering the biofuels market with the cultivation of the jatropha plant. Jatropha is a second generation biofuel which has the ability to be grown as an agrofuel. Jatropha is a “wonder plant” because it grows easily in India where no other plant product will grow. It is not eaten, so using it for biofuels does not take away from the food supply. Growing jatropha requires little maintenance. Yet the cost of producing jatropha-based biofuels is currently about twice as much as other sources. Finding a method of making commercially viable biofuels from jatropha is certainly an opportunity.

And, considering that India has reasons to look for new sources of fuel, it seemingly is an opportunity that is welcome in India. Right now, the demand for crude oil in India is drastically rising as the country develops rapidly. Biofuels offer a sustainable source of energy for India and provide it with an opportunity to greatly reduce its global footprint.

Internationally, the US and Brazil currently provide 80% of the world’s ethanol. While the US produces corn-derived ethanol, Brazil makes ethanol from sugar cane. Sugar cane requires less land, less fossil fuels, has better climate benefits, and fewer environmental detriments. At the end of 2011, a US tariff on imported ethanol expired, opening up trade options. Because the cost of the tariff raised the price of the ethanol, the tariff elimination means that ethanol can now sell at market prices.

Q: Where does the use of algae in biofuels fit into the conversation?

A: Algae are a second generation biofuel. Algae growth is expected to increase drastically as soon as production costs can be lowered by new technology. Algae are important for the future of biofuels because they deliver a number of environmental benefits that advanced biodiesel feedstock does not. First, algae can be grown on nonarable land—a huge benefit that could solve the food vs fuel dilemma. Algae can also utilize a variety of water supplies such as wastewater and seawater. It can be grown in huge vats of great height. Unlike biofuels from feedstock, which can only be grown on the ground, algae have the capability of producing higher yields in a smaller amount of space. Algae feed on carbon dioxide, which is a huge environmental plus.

Microalgae will likely dominate algae production in the future. Although microalgae will continue to be produced in areas with large coastal regions, they will be the front-runner that new technologies will be based on. Microalgae can be grown rapidly and offer genetically modified-attractive qualities for cultivators looking to grow algae on the inland. By 2012, North America and Asia Pacific are projected to produce at least 50 million gallons of algae-based biofuels per year.

New companies and sites are emerging to enhance the production of biofuels from algae. For example, an algae pilot plant constructed by Murdoch University and the University of Adelaide is located in Karratha, Australia. One of the world’s largest biofuel operations has also built a demonstration site in the western Australia town and is regularly producing algal biomass. Yet, the technology remains expensive and is still far from reaching mainstream use.

Q: What is Koehler Instrument Company, in collaboration with Cole-Parmer, doing to further the cause of biofuels as an effective alternative fuel source?

A: Koehler Instrument Company is committed to becoming a leading supplier of biofuels testing equipment. We currently offer a wide variety of instruments that can be used to test biodiesel, bioethanol, and the biodiesel blend. Koehler Instrument Company remains up to date on important issues in the biofuels industry through events such as the annual National Biodiesel Conference, held in Florida, and with active participation in the ASTM committees related to Biofuels.

As a distributor for Koehler Instrument Company, as well as a partner in biofuels education, Cole-Parmer has designated a section of their web site, ColeParmer.com, exclusively for biofuels research and testing. Here, laboratories are able to view all the instrumentation required to complete the three ASTM specifications for biofuels as well as learn what each of these tests are used for. Cole-Parmer and Koehler Instrument Company are striving to demystify the requirements, providing clear communication on the specifications needed to perform biofuel testing. These resources are geared toward a wide range of users—from the first-time biofuel producer to the advanced producer. Technical experts at Cole-Parmer can advise interested parties about the minimum testing requirements and what equipment is most feasible, based on budget.

For more information, go to Biofuels or call 800-323-4340 and ask to speak with an application specialist.