How To Select And Use The Right Temperature Sensor

AVAILABLE IN: English
Used with permission from Pyromation Inc.

Having been involved in the design, manufacture, and application of temperature sensors for twenty years, I have done a number of training seminars on temperature sensors. After presenting long-winded explanations as to how RTDs (Resistance Temperature Detectors) and thermocouples are constructed and used, people usually ask the question “OK, so how do I determine which sensor to use in my application?” This paper is intended to answer that question.

After a brief review of how RTDs and thermocouples are constructed and used to measure temperature, we will discuss what differentiates these sensors from one another. We will discuss the topics of temperature range, tolerance, accuracy, interchangeability, and relative strengths and weaknesses for each type. After reviewing these topics you will have a better understanding as to when each type of sensor should be used and why.

Review of RTD and thermocouple basics 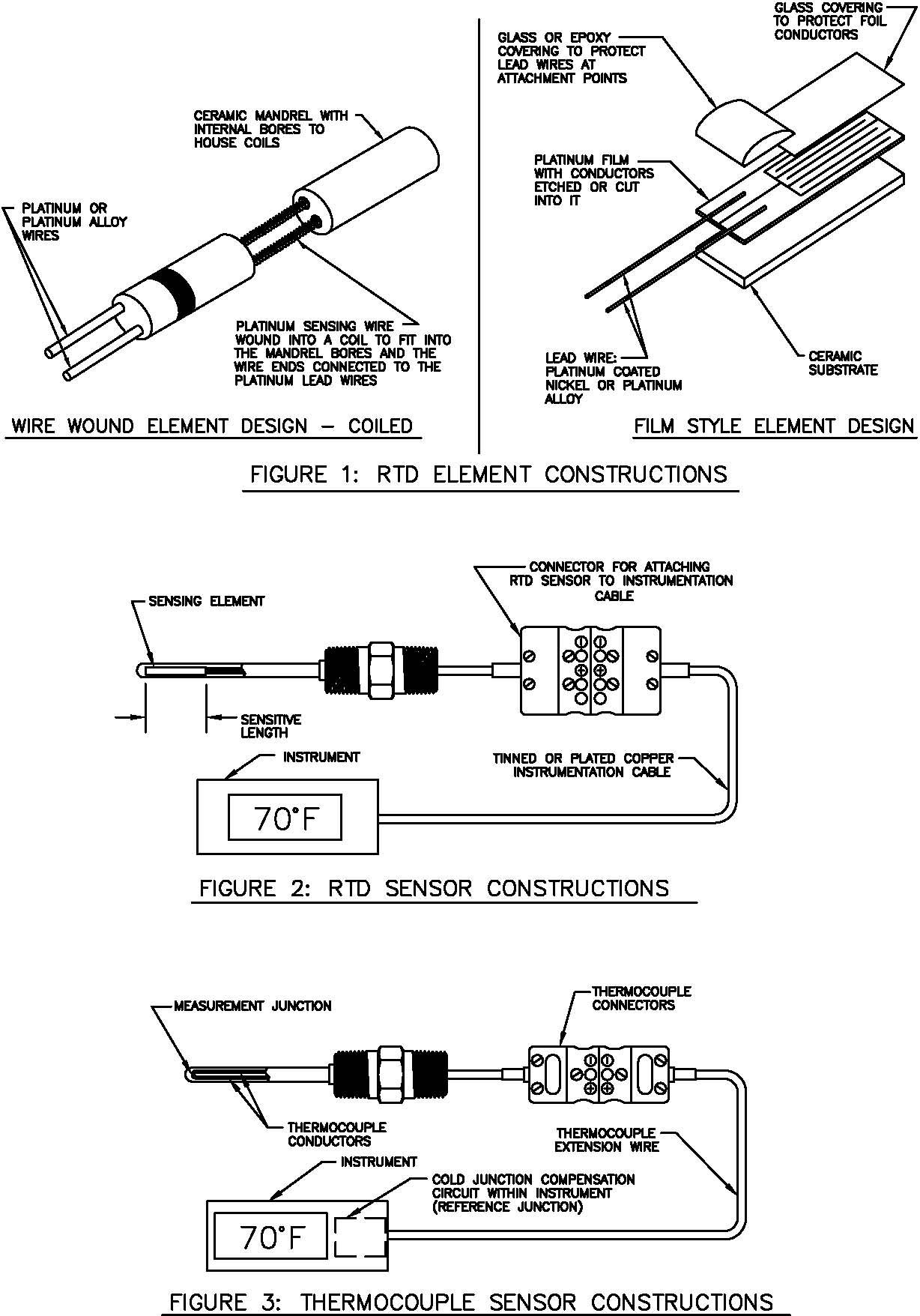 Temperature limitations for RTDs and thermocouples

The materials used in RTDs and thermocouples have temperature limitations that can be an important consideration in their use.

The sensing element in an RTD usually contains a platinum wire or film, a ceramic housing, and ceramic cement or glass to seal the sensing element and support the element wire. Typically, platinum sensing elements are able to be exposed to temperatures up to approximately 1200°F. Other materials such as nickel, copper and a nickel/iron alloy can also be used, however, their useful temperature ranges are quite a bit lower than for platinum. Usage temperatures for all these materials are shown in Table 1.

The wires that connect the sensing element to the readout or control instrumentation are usually made of materials such as nickel, nickel alloys, tined copper, silver plated copper or nickel plated copper. The wire insulation used also directly influences the temperature to which the RTD can be exposed. Table 2 contains the commonly used wire and insulation materials and their maximum usage temperatures.

Placing the sensing element into the process also requires the use of materials. The most common arrangement used is to place the resistor and attached wires into a closed-ended metal tube, pack the tube with a vibration dampening and/or heat transfer material such as ceramic powder, and seal the open end of the tube with an epoxy or ceramic cement. The metal tubes most commonly used in RTDs are made of stainless steel (used to approximately 900°F) or Inconel (used to approximately 1200°F). The vibration dampening/heat transfer materials used vary widely in temperature range. These materials are selected by the manufacturer to provide the optimum performance based on the maximum temperature expected in use. Epoxy sealing compounds are typically never used above 400 to 500°F. Ceramic cements can be exposed to temperatures of 2000°F or more, but require sealants to keep moisture out of the cement and the vibration dampening/ heat transfer material beneath.

High temperature constructions typically use fiberglass-insulated, nickel-plated copper wire and a ceramic cement, which has a maximum temperature of 900 to 1200°F. Some manufacturers also offer a line of RTDs that use a ceramic insulated nickel or nickel alloy wire for use up to 1200°F.

Thermocouple materials are available in Types E, J, K, N, T, R, S, and B. These thermocouple types can be separated into two categories: base metal and noble metal.

Type E, J, K, N, and T thermocouples are known as base metal thermocouples because they are made of common materials such as copper, nickel, aluminum, iron, chromium, and silicon. Each thermocouple type has preferred usage conditions. For example, the use of bare Type J thermocouples (iron/constantan) is typically limited to a maximum temperature of 1000°F and is not recommended for use in oxidizing or sulfurous atmospheres due to deterioration of the iron conductor. Bare Type T thermocouples (copper/constantan) are not used above 700°F due to deterioration of the copper conductor. Temperature ranges for these thermocouple types are included in Table 3, and additional application information is included in Table 4.

Tolerance and accuracy are the most misunderstood terms in temperature measurement. The term tolerance refers to a specific requirement, which is usually plus or minus some amount. Accuracy on the other hand refers to an infinite number of tolerances over a specified range.

For example, RTDs contain a sensing element that is manufactured to have a specific electrical resistance at a specific temperature. The most common example of this requirement is what’s known as the DIN standard. To meet the requirements of the DIN standard, an RTD must have a resistance of 100 Ω – 0.12 % (or 0.12 Ω) at 32°F (0°C) to be considered a Grade B sensor (a Grade A sensor is 100 Ω – 0.06%). The tolerance of – 0.12 Ω applies only to the resistance at 32°F and cannot be applied to any other temperature. Many suppliers will provide an interchangeability table.

RTDs which provide the user with a table of tolerances at specific temperatures (see Table 5):

Thermocouples, on the other hand, are specified differently than RTDs because they are manufactured differently. Unlike the sensing element found in RTDs, the millivolt potential generated in a thermocouple is a function of the material composition and the metallurgical structure of the conductors. Therefore, thermocouples are not assigned a value at a specific temperature, but given limits of error which cover an entire temperature range.

Each type of temperature sensor has particular strengths and weaknesses.

RTDs are commonly used in applications where repeatability and accuracy are important considerations. Properly constructed platinum RTDs have very repeatable resistance vs. temperature characteristics over time. If a process will be run at a specific temperature, the specific resistance of the RTD at that temperature can be determined in the laboratory and it will not vary significantly over time. RTDs also allow for easier interchangeability since their original variation is much lower than that of thermocouples. For example, a Type K thermocouple used at 400°F has a standard limit of error of –4°F. A 100 Ω DIN, Grade B platinum RTD has an interchangeability of –2.2°F at this same temperature. RTDs also can be used with standard instrumentation cable for connection to display or control equipment where thermocouples must have matching thermocouple wire to obtain an accurate measurement.

Thermocouples can be used to temperatures as high as 3100°F, generally cost less than RTDs, and they can be made smaller in size (down to approximately 0.020" dia) to allow for faster response to temperature. Thermocouples are also more durable than RTDs and can therefore be used in high vibration and shock applications.

Thermocouples are less stable than RTDs when exposed to moderate or high temperature conditions. In critical applications, thermocouples should be removed and tested under controlled conditions in order to verify performance. Thermocouple extension wire must be used in hooking up thermocouple sensors to thermocouple instrument or control equipment. Use of instrumentation wire (plated copper) will result in errors when ambient temperatures change.

Both thermocouples and RTDs are useful instruments for determining process temperature. RTDs provide higher accuracy than thermocouples in their temperature range because platinum is a more stable material than are most thermocouple materials. RTDs also use standard instrumentation wire to connect to the measurement or control equipment.

Thermocouples are generally less expensive than RTDs, they are more durable in high vibration or mechanical shock applications, and are usable to higher temperatures. Thermocouples can be made smaller in size than most RTDs so they can be formed to fit a particular application.